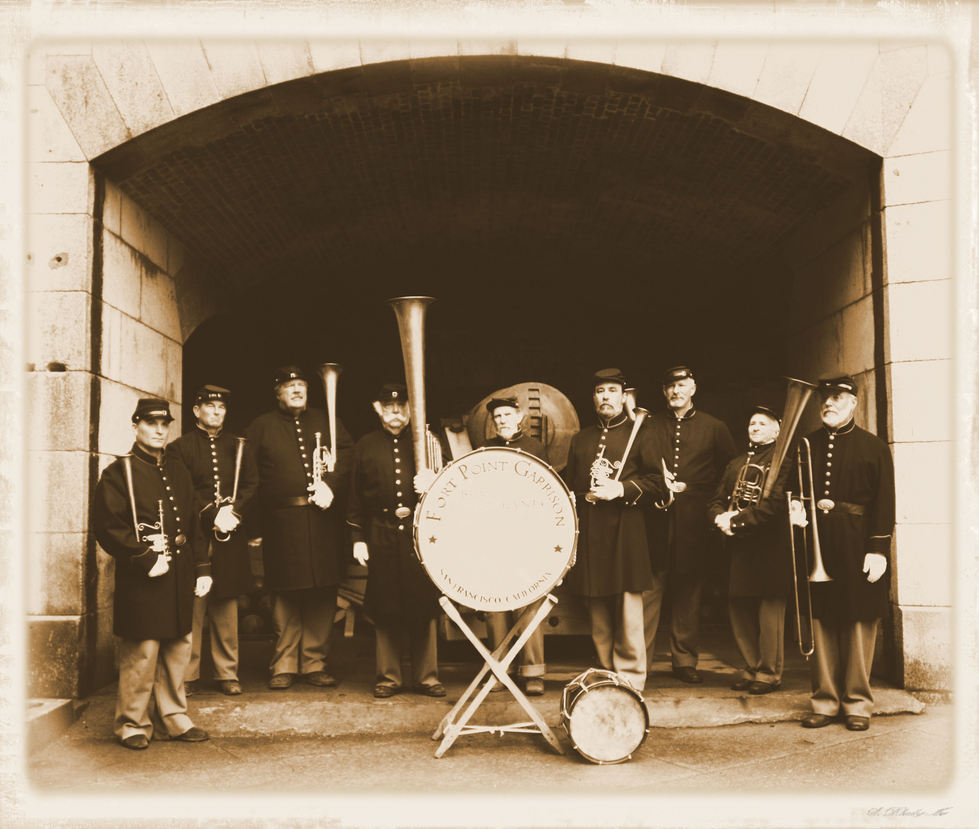 Bb Cornet
Bill is the Director of Institutional Research at California State University, Chico. He has been re-enacting for over 10 years with the Re-enactors of the American Civil War (RACW) and served as Confederate Brigade Commander and President of the RACW.

Bill took a loyalty oath upon hearing that the band needed another cornet player and joined right up. He also provides assistant bugler duties for Band Manager Doug Thompson. 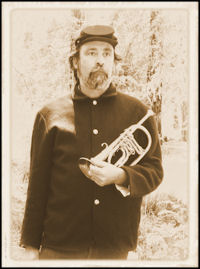 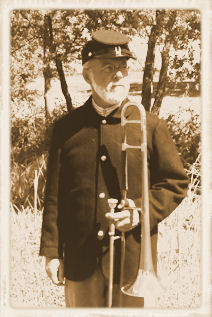 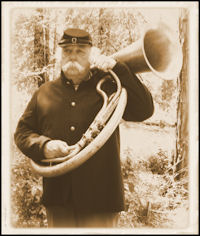 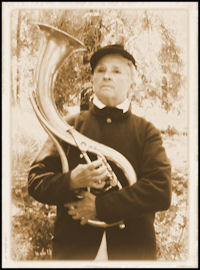 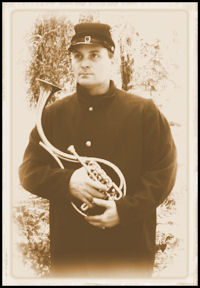 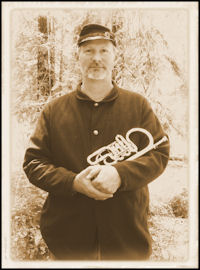 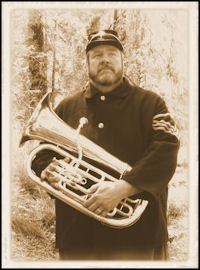 Chris started playing with the group in 2007. He has also played in the Oakhurst Community Concert Band for nearly 20 years. By profession, Chris is a licensed utility worker with Madera County.

Civil War era music runs in Chris's family as he has an ancestor that was a fifer with the 43rd Ohio.
Marty studied trombone and baritone at UCLA with Paul Tanner and George Roberts, then, tired of counting rests, changed to oboe, earned an MA in Oboe Performance, and enjoyed a long career as an orchestral oboist and English Horn soloist. When the thrill and terror of orchestral playing paled; a new challenge was needed. What could be better than cramming hundreds of obscure fife tunes into the tiny crevices of one’s brain? Besides, there was the limitless fun of thousands of hours researching the manners, morals, and material culture of the mid-nineteenth century, hardtack, hard ground, and hard marching!

Now playing with the Fort Point Garrison Brass Band, and returning at last to Brass Roots, Marty also serves as a Director of CCDB, California’s official fife and drum corps, and on the Executive Board of the International Company of Fifers and Drummers. And then there's the tall ships ...
Greg is a sales rep for a wholesale distribution firm in San Jose. He has been reenacting with the National Civil War Association since 1986 and serves in Co. A, 2nd Massachusetts Cavalry, the California 100. He  has played trombone for over 45 years, and is a member of the Peninsula Symphonic Band, the College of San Mateo Symphonic Band, and the Cal Aggie Alumni Marching Band. He is one of the original FPGBB members.
Doug is a technical writer by profession. He has been re-enacting since 2000, bugling for the 3rd US Artillery (CHAS) and the Union Brigade.

Doug is our founder/band manager and was inspired to start the band after playing with the Federal City Brass Band during his participation in the Eastern Field Music School and finding interested musicians amongst his fellow re-enactors. He has played Tenor horn, Eb Alto horn, and Bb cornet with the band.
Though Eric started collage as a Music Major, he graduated with degree in Physical Education in 1986, with a minor in Music, since there were more job opportunities in Physical Education. He has been a men's gymnastics coach ever since 1982 and has coached 22 gymnastics that have been on a USA Gymnastics National Teams. One gymnast Eric coached competed in the 2016 Olympics.


​Eric continues to play his trumpet/cornet since he started in 4th grade. Besides playing in the FPGBB since 2006, Eric has also been playing lead trumpet in the Ophir Prison Band since 1984.
​
​Playing in a Civil War band is in Eric's blood. His Great-Great Grandfather played an Eb Bass OTS Saxhorn in Company E of the 81st Regiment Infantry and Brigade Band of the New York Volunteers from 1861 - 1864.

​​Eric not only developed and maintains this FPGBB website, he also founded and maintains his American Historical Brass Band Society website which is a great resource for all reenactment bands and musicians as well as produces gigs.
Eric deals with collectors, repairmen and players worldwide on a regular basis. Eric often supplies the FPGBB, and new members, with instruments from his Civil War era brasswind instrument collection. Eric even supplied Civil War OTS Saxhorns, as well as performed, in Episode 6 of the HBO mini series Family Tree.

​If you know of any Civil War era brass wind instruments available for sale or donation for our non-profit organization, please contact Eric at Eric@HornCollector.com.
Mac was a music performance major at Fresno State University and Texas Tech. Mac was in US army bands for 3 years including the US Navy School of Music, 21st Army Band at Ft. Huacha, Arizona and the 8th Inf. Div. HQ Band at Kreuznach, Germany.

Eb Alto
Bruce has changed his career path from an engineer working on satellites and rockets, to being a simple farmer. He now maintains his spread in Grass Valley, and is thankful to leave the rat race behind.

​As a youth, he began playing on horns and still does. After his student days playing in school band, Bruce kept on playing with various community bands, marching bands, jazz bands and so on (six groups currently). His credo is 'anything with valves or slides'. For fun, he also strums on his collection of ukuleles.

​Looking for a new challenge, Bruce took up the Alto horn in 2016, and adds to the strident march music of Fort Point Garrison Brass Band. 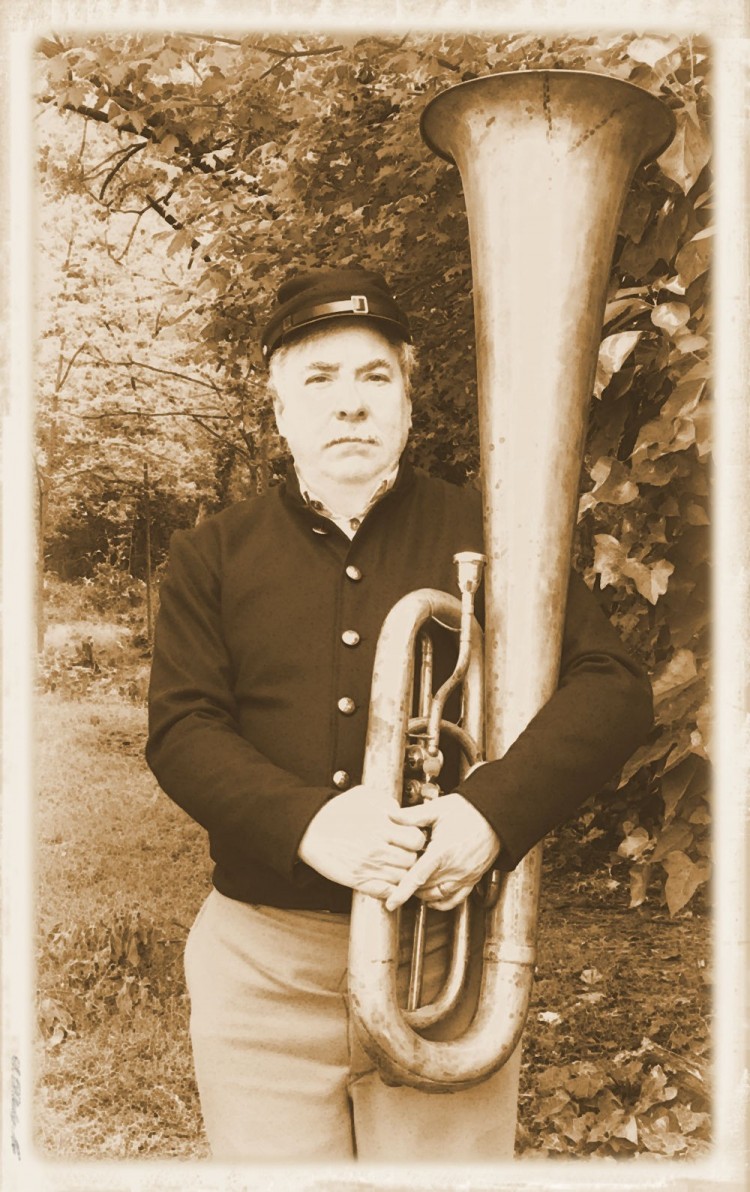 John has been playing low brass instruments for almost 50 years, starting in the Chicago area on Euphonium and switching to tuba in middle school. Playing in the Greater Chicago and Chicago Metropolitan Youth Orchestras in high school, John studied with Arnold Jacobs of the Chicago Symphony and Fred Luscombe of the Lyric Opera Orchestra.

Currently, John performs in several bay area groups including the California Pops Orchestra, Nova Vista Symphony and Foothills Wind Ensemble having previously played in area orchestras and bands in Chicago, Phoenix and Detroit. Recently relocated to the bay area from the Motor City to work in automotive acoustic and audio design and desiring to continue performing in a civil war era ensemble, John joined the ranks of the Fort Point Garrison Brass Band.